You are here: Home / Lifestyle / WHEN IN ROME… MAXXI AND ZAHA HADID! 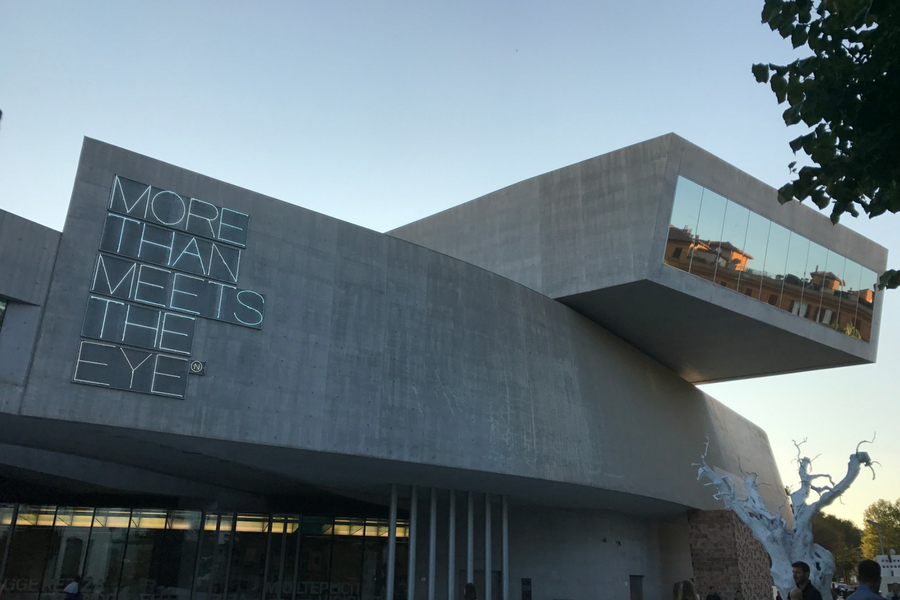 Rome offers countless options for visitors interested in Art and Culture. Its ancient heritage attracts tourists from all over the world, and if you have wandered around its streets you will understand why. But who said there is no space for Contemporary Art in the antique Rome? Do not give up on visiting this amazing city if you are more into Modern Architecture and Design. MAXXI is waiting for you!

WELCOME TO THE MAXXI

Just north of the city center and easily accessible by public transport we find Flaminio quarter. This area reflects that the Eternal city is not only ruins and ancient buildings. The last two and most remarkable examples are the Auditorium Parco Della Musica, by Renzo Piano, and MAXXI, the Museum of the Arts of the XXI Century. Both are definitely masterpieces and worth a visit, but we will focus on the second one.

Zaha Hadid, one of the most influential Architects in XXI century, once imagined the space which now pays tribute to her. Visiting her most iconic works and see her evolution in a space created by herself is like walking in a sanctuary.

It was in 1998 when she won the competition over 273 candidates to create the first national center dedicated to Contemporary Art in Italy. Not an easy challenge, but Dame Zaha Hadid understood perfectly the needs of this new space.

As the idiom says, Rome was not built in a day. Neither was MAXXI, but after 10 years the project became a reality. 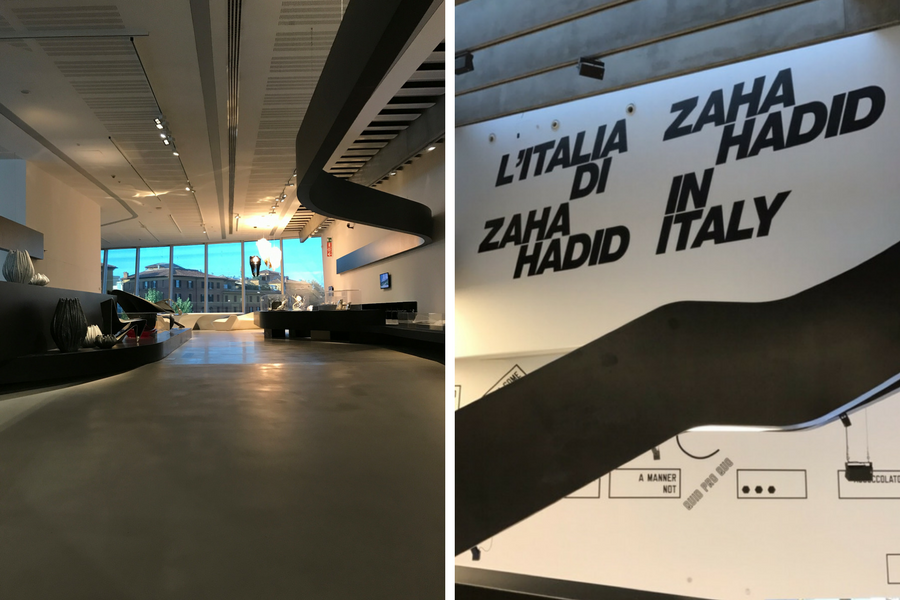 As described by the author, “the design presents itself as a world in which to become immersed more than a building as a single object“.

It is dynamic and allows the visitor to see different points of view of a same object or space, discovering new perspectives.

The museum is a public space for people to enjoy and not only contemplate art pieces.

Until the 14th of January, the visitor will have the opportunity to enjoy some of the most iconic Hadid’s creations, with the accent in her relation with Italy.

The exhibition is a proof of her versatility and capacity to create no matter what and do it superbly. We will find pictorial sketches and three-dimensional models, virtual representations and the last projects focused on the most advanced solutions and technologies. From cheese graters and door handles to lamps or sofas… 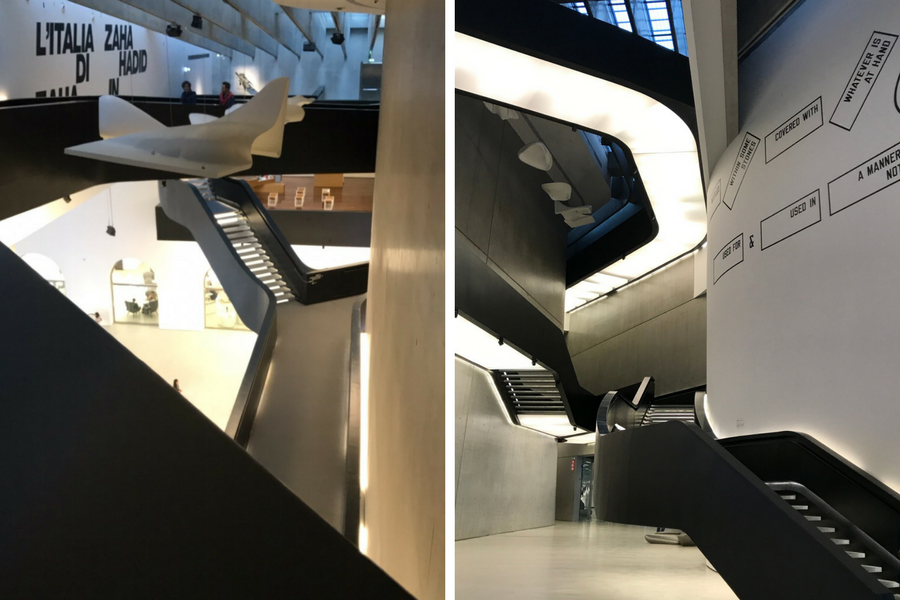 The building itself is a reason to pay a visit. There is a nice atmosphere in the surroundings, where people gather for chatting or having a drink. Apart from the exhibition areas, MAXXI counts with a café, a restaurant, a bookshop and a vibrant events agenda.

Zaha Hadid studied mathematics at the American University in Beirut. In 1972 she would move to London to study architecture at the Architectural Association. After her graduation, she joined the Office of Metropolitan Architecture (OMA).

This brave woman opened her own studio in 1980 and taught at the Architectural Association (AA) with OMA collaborators Rem Koolhaas and Elia Zenghelis.

Her architecture is part of worldwide exhibitions. She experimented with new spatial concepts in a unique way.  Zaha worked in all fields of design, from the urban scale to interiors, furniture and even fashion. 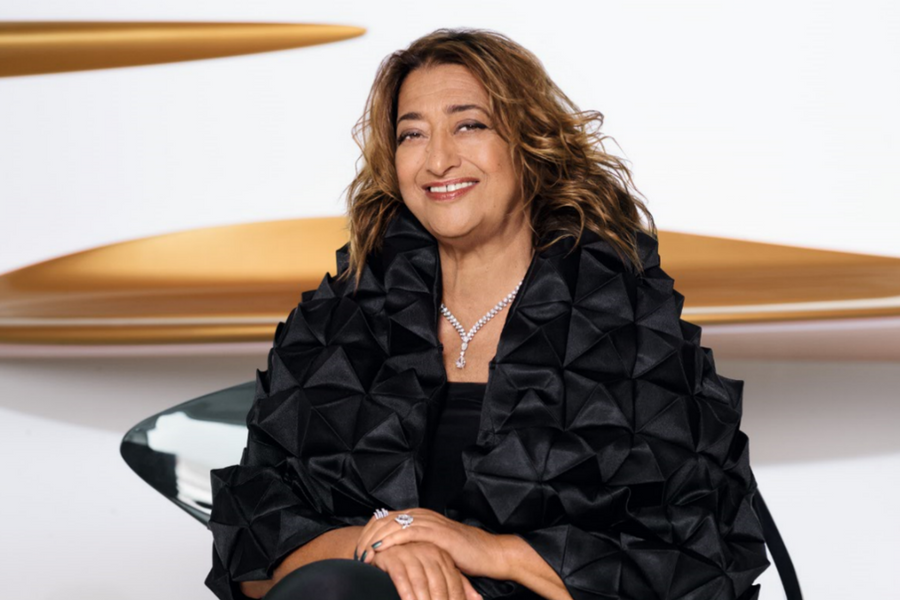 The Iraqi overpassed obstacles and fought for the dream she pursued since childhood, to become an architect. A woman architect, a definition that she first hated and then accepted as a recognition for her achievements in a men’s world. She was a flag–bearer for women, in a still men-dominated field. She fought for equality and got the recognition.

“Your success will not be determined by your gender or your ethnicity but only by the scope of your dreams.”

Zaha was the first woman to win the prestigious RIBA Gold Medal and the Pritzker Prize. She also won the Stirling Prize twice, one of them for the MAXXI.

She also counts with Mies van der Rohe Award. Her hard work and persistence brought her to the list of the most influential Architects in the world.

“As a woman in architecture you’re always an outsider,” Hadid said when receiving the Gold Medal. “But it’s okay, I like being on the edge”.

Her unfortunate demise last year left 36 projects in 21 countries orphaned, but her legacy keeps her alive amongst all those who love Art, Architecture, and Design.

Then you will love these other articles about Art too.

THE UAE PAVILLION AT THE VENICE BIENNALE

THE AJALA PROJECT: ART WITH A SOCIAL HEART