You are here: Home / Lifestyle / CHECK THE BEST MOVIES OF DIFF 17! 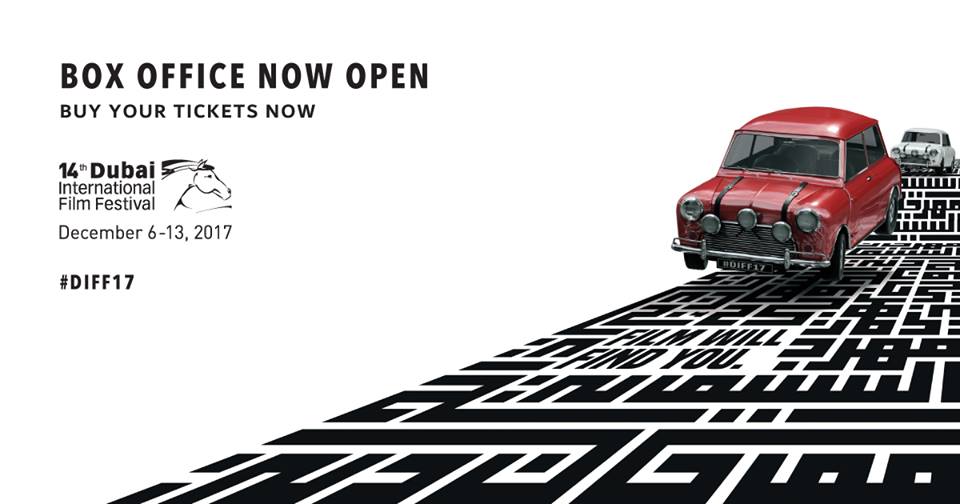 Dubai International Film Festival (DIFF 17) considered as one of the top 15 must-visit film festivals, is back in Dubai for its 14th edition. It will take place from the 6th to 13th of December 2017. Prepare to watch original movies in scoop coming not only from the Arab World but also from across the Globe.

Furthermore, during these days DIFF 17 will have a Forum with interesting industry-oriented talks, a Film Market where this bursting industry cooks their future productions. And even a Virtual Reality film programme that we are really looking forward to seeing.

DIFF 17 counts with different venues along Dubai although Madinat Jumeirah is the headquarters of the Festival. The venues will play an important role in this cinematographic experience. All audiences will have the opportunity to enjoy cinema at its best.

For those looking to dress up, Madinat Arena will be hosting Gala Screenings and Red Carpets.

For the ones feeling like chilling and relaxing  “The Beach” at JBR is your place. They will have open-air free-to-attend screenings. Make sure you get there on time to grab you puff.

Galleria Mall will be showing films at the amazing rooftop VOX Outdoor Cinema. In both places, you can enjoy the breeze while watching a great movie. Grab your popcorns, good company, and a jacket!

Classic fans don’t worry, there is also a venue dedicated to you all. VOX Cinemas at Mall Of Emirates and Madinat Theater offer a comfortable experience for exigent cinephiles.

At the 2017 Dubai International Film Festival (DIFF 17) is all about the movies that are being played along the festival. This edition we will be able to enjoy a wide selection of original movies. In almost 40 different languages, the festival aims to show the enrichment of a cultural dialogue.

We have asked our team about the films they are not willing to miss. This is their selection. Mind you, it hasn’t been an easy task to shortlist them. All the movies are excellent.

The Shape Of Water

As a big fan of the award-winning director Guillermo Del Toro, I’m really looking forward to seeing his new movie. The beauty of strangeness and magical atmosphere are his signatures. This is an unconventional love story. A mute cleaning lady working at a government laboratory finds love in an anthropomorphic sea creature that is being studied.

Loving all Japanese things, my next movie on the list is this anime directed by Noboyuki Takeguchi. A story of love, friendship and the daily struggles of mid-school students.

Winner of the Jury Prize of the last Cannes Film Festival and Best Film at London Film Festival this movie looks promising. This story is about a couple facing an intense divorce that triggers their kid to run away.

The Killing Of A Sacred Deer

Because Nicole Kidman is one of my favorites actresses, this movie is a must-see for me. A psychological thriller about a heart surgeon: Steven, who becomes friends with Martin, an awkward teenage boy. As Martin gets closer to Steven’s family, strange things begin to happen.

Kad Merad is one of the most famous French actors. Through his different movies, he always delivers emotional performances whether it’s a comedy or a drama movie. The story is about a teacher who is an aging, disillusioned violinist and his student in Paris. So it is all about discovering passion for music in Paris, the most romantic city in the world.

One Of These Days

Set in the charming and vulnerable Beirut. The movie follows the lives of three young people, Maya, Yasmina and Tarek during 24 hours. I’m looking forward to this movie to discover more about the attachments of these characters to Lebanon. A politically fragile nation which culture and heritage remains strong.

A romantic drama. Gloria Grahame, an American Hollywood actress, falls in love with a British man while suffering from cancer. Seems like a heartbreaking love story, so don’t forget to bring a box of tissues!

I’m a lover of romantic films and happy endings. The Bachelors is about a widowed man traveling around the US with his son. They meet two amazing women that will change their lives and help them rediscover love.

Who won’t love to have a Manolo’s shoes in their closet! This fashion related movie had to be part of the list. This is a documentary about Manolo Blahnik’s life. From his humble origins to become one of the greatest shoemakers of the XXth Century.

I felt a deep connection with this movie because I love traveling, observing and learning through people’s ways of life. A beautiful visual journey through the French countryside. Featured and directed by Agnès Varda and JR an urban artist/photographer.  We will be part of their travel, spreading their artistic view of daily life.

I felt interested in this movie because is not a usual story of immigration. This movie tells the story of a Tunisian family who hasn’t heard about their son who immigrated to Italy.

I selected this movie because of my Spanish blood, and I grew up surrounded by this tradition. It’s an animation about a Spanish fighting bull who prefers smelling flowers over chasing red clothes. A meaningful story about breaking our own stereotypes and fighting for what we want to be.

If you want more information, check the following hashtags and handles:

Dubai International Film Festival is key to develop a film culture in the region. So invite your family and friends and go all together to the DIFF 17 movies!

Then you will love these other articles too!

LOUVRE ABU DHABI, A MUSEUM FOR THE WORLD

THE UAE PAVILION AT THE VENICE BIENNALE

THE AJALA PROJECT: ART WITH A SOCIAL HEART