You are here: Home / Fashion / A KANDORA IN SPACE! 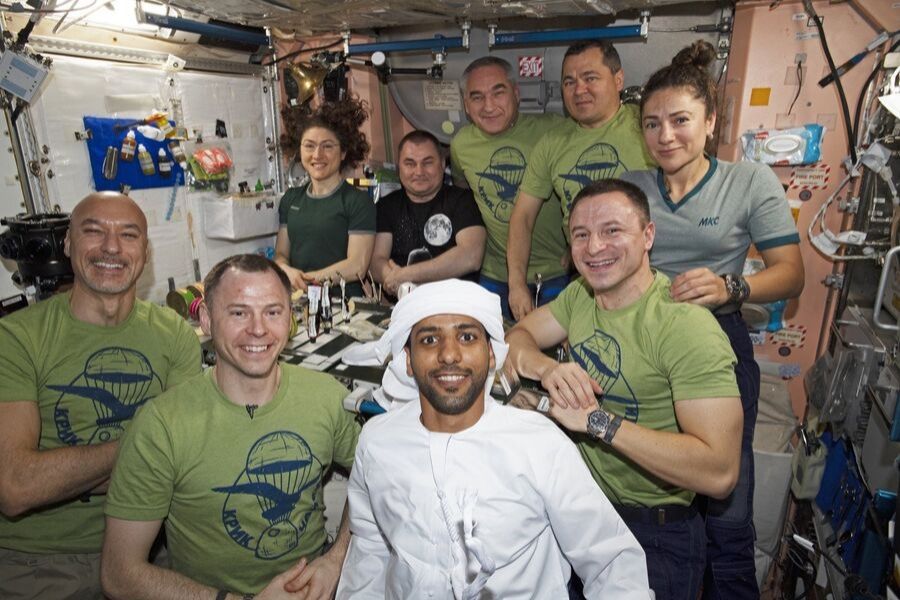 October is a month of many important dates around the world. Breast cancer awareness month, bullying prevention, return to school for most Unis, and from now on… It will be the month when an Emirati for the first time went to space. Yey! But for Dubai we most count from now on an additional date no one saw coming: the day the kandora touched space.

It was on October 1st of 2019 when astronaut Hazzaa Al Mansoori, the first person from the United Arab Emirates in space show to the world through his social media what many could think as a simple photo with his crew members. He was actually making a huge cultural and fashion statement wearing a kandora in space. It is the first time this happens coming from someone in the region, and ever on a space mission. So far, no one has ever taken something so personal culturally speaking and show it to the world like this, literally…

The Mohammed Bin Rashid Space Center gave Hazzaa a 10-kilogram bag with different and important elements from the Emirati heritage and culture. On his return, all those belongings will be exhibited and placed in museums. This photo was taken in the “Emirati night” Hazza hosted for his astronaut fellows.

What is a Kandora?

Just in case you dont know, the kandora is one of the most beautiful and traditional elements from the Arab fashion and culture. It´s known it started to be used at least since 1956 with its different variations according to the country in the MENA region. Some people know this piece as thawb- a term used in some of the countries in the region for the female version of the beautiful and iconic piece. In the UAE, it refers only to the male fashion piece.

AlMansoori made a before and after with a simple picture. He made a cultural statement a beautiful and iconic moment for every Emirati citizen ( and residents! At DFN we feel so proud!). And be prepared because this will not be the last time you see a kandora in space, I am absolutely sure of that! Next time, maybe an Abaya! That would mean we have ladies astronauts. Where can we apply?

Mars 2021 has scheduled another spaceship mission from the Emirates. It might be another perfect moment to wear the most iconic fashion piece of the Arab culture or do some dune bashing in remote planets.

Stay tuned, because history has been made, and yet a lot is about to happen…

THE UAE PAVILION AT THE VENICE BIENNALE

TIMBERLAND GIVES BACK TO THE PLANET