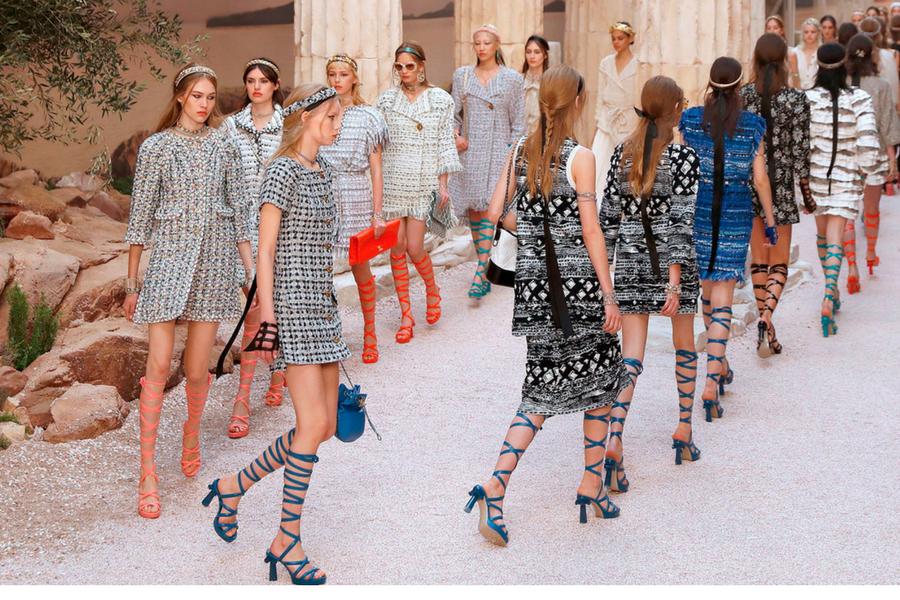 After Cuba, Dubai and Rome, Karl Lagerfeld has been crowned as the King of surprises. For this Chanel Cruise 2018, he transformed the Grand Palais into a Greek temple. He staged ruins, pillars, olive trees and a Mediterranean sunset as backdrop. Under the motto “the modernity of antiquity”, the Kaiser reclaimed the timeless elegance and simplicity of those times. 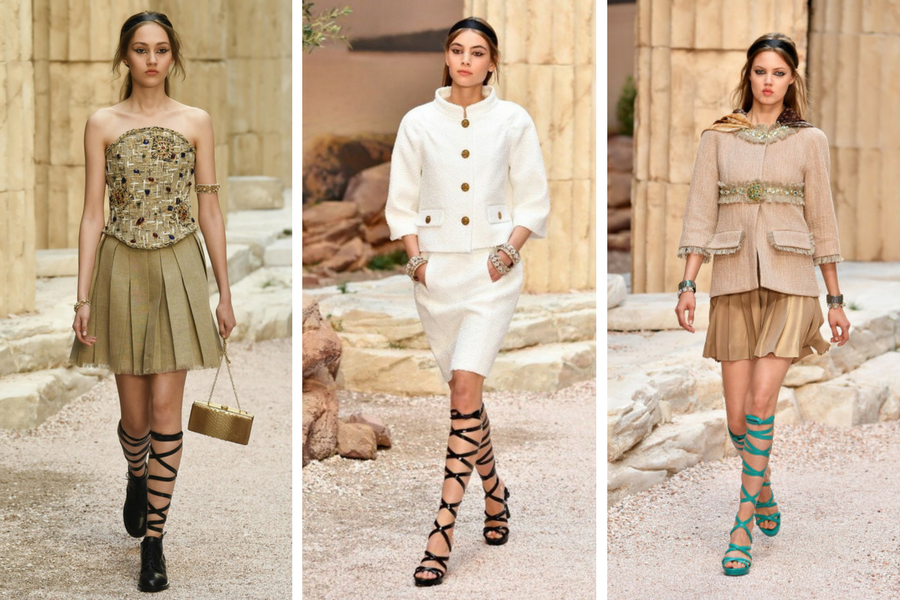 To accessorize there were tiaras and golden vines as headbands, and colorful knee-high gladiator sandals with heels shaped as ionic columns. There were also cute round bags with Athena´s Owls and silver backpacks with huge Chanel logos. The models had busy necklaces, earrings and bracelets up in the arm. One very Chanel detail was the gloves… don´t they remind you of someone? 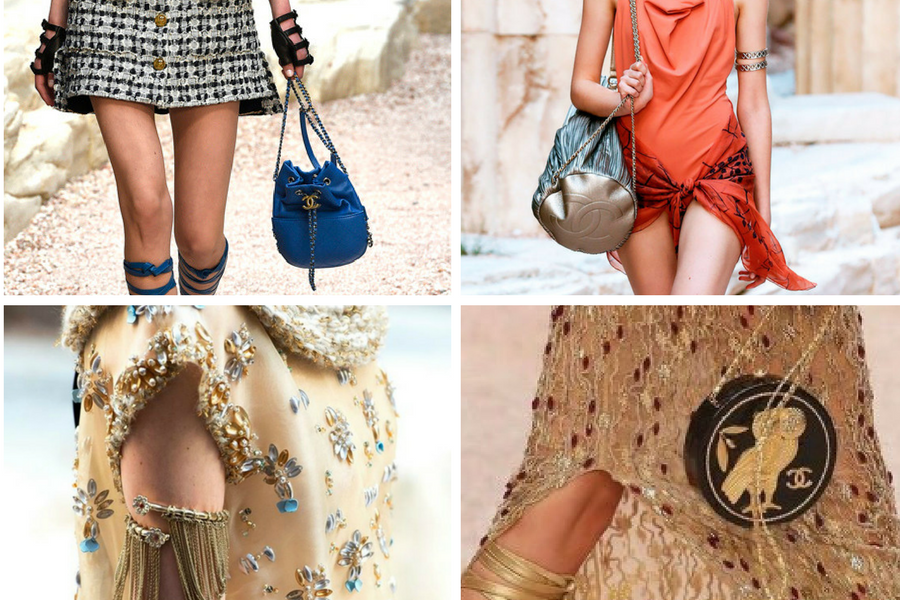 There was one piece: a coat in transparent plastic with white trims. In my humble opinion, this piece is not aligned with the rest of the collection but still is interesting.

Initially, Karl Lagerfeld wanted to stage the runway directly in Greece at one historic venue. But the Archaeological Council rejected the proposal. That didn’t stop him to recreate his own idea of Greece in the heart of Paris. The ruins on stage were a mix of Cape Sounion and the Parthenon.

There were olive trees, gravel paths and even herbs. It pretty looked very much like my own idea and memory of Greece. 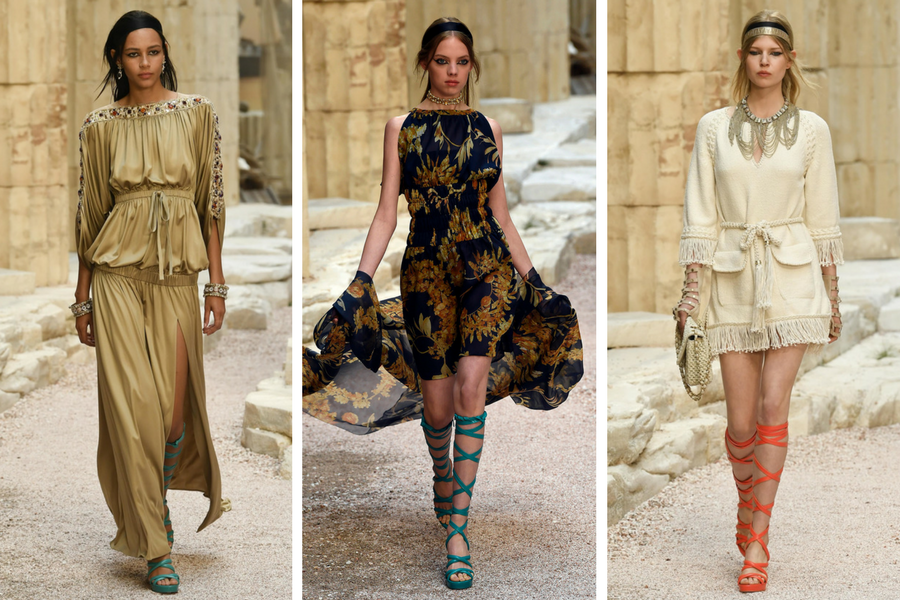 The inspiration of this collection is coming from a bust of a Venus located in the apartment of the founder of the Chanel Maison, Gabrielle Chanel in Rue Cambon. Just above Chanel´s flagship store.

Kaiser Karl Lagerfeld Greece´s idea is based on the origin of beauty and culture. He conveyed the message and got us all to love this new Chanel Cruise collection. 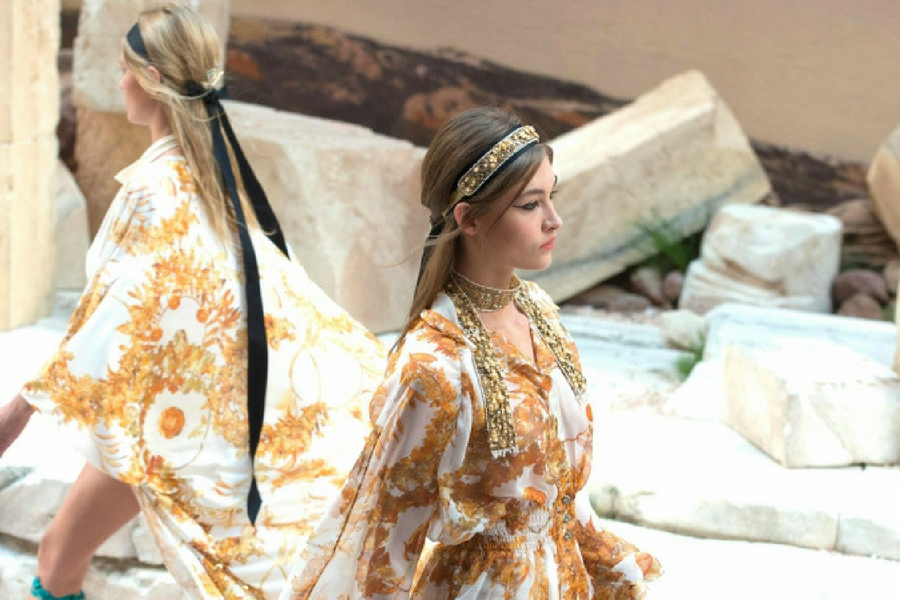