You are here: Home / Fashion / #BOYCOTTDOLCEGABBANA OR #APPLAUDEDOLCEGABBANA? SHOULD WE MIX FASHION AND POLITICS? 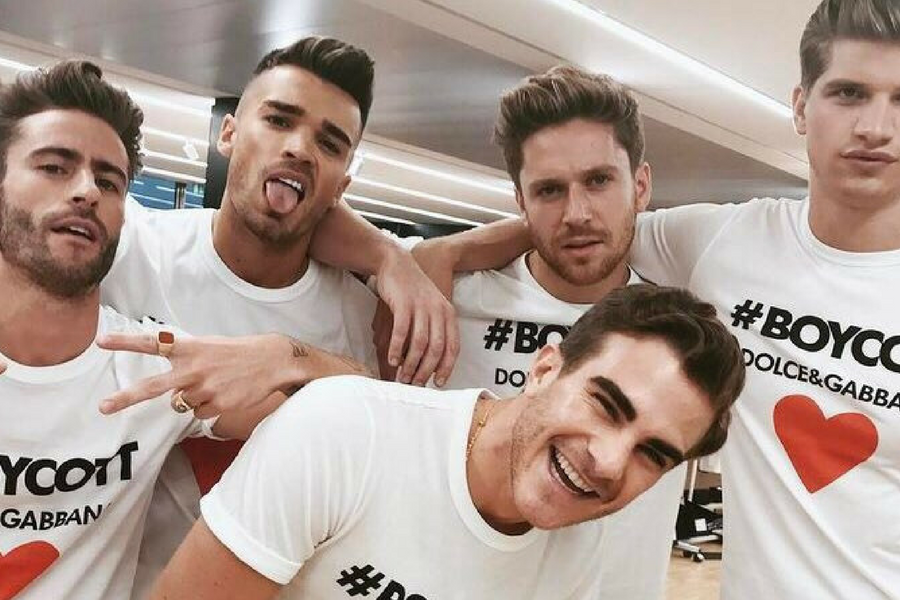 Have you seen the  #BOYCOTTDOLCEGABBANA T-shirts? Probably. There is even an ad with Dolce and Stefano Gabbana wearing them in what looks like a demonstration not to buy the brand. Confused? Well, a little. Let us walk you through the entire story.

WHERE THE #BOYCOTTDOLCEGABBANA STORY BEGINS?

Dolce & Gabbana DNA was ever present. A combination of high tailored suits, and colorfully ready to wear outfits predominated during the show. From samurai printed oversized sweaters to straight-cut leopard print pants, the collection seems to be inspired from everywhere. Bomber jackets were reinvented in silk with oversized shoulders, combined with a baroque “heart of Jesus” print.

The show continued with some amazing poker prints outfits, including sequined tops and tailored suits. We can identify an explosion of diverse inspirations through the collection, where the many powerful prints were playing the principal role.

Many second scene stars were invited to walk the fashion show. Names like Myles O’Neal, son of basketball star Shaquille O’Neal, or Braison Cyrus, brother of Miley Cyrus. Together with Instagram kings and queens like Tony Mahfud, King Bach Canadian-American actor. The new generation of fashion influencers seems to replace top model careers in the catwalk.

Along with the fashion diversity, the show became trending topic because of a social media battle. Especially between Stefano Gabbana, creative director, and Miley Cyrus.

The US singer proudly posted a picture of his brother, Braison Cyrus, who was one of the models during the show. And she added a comment against D&G political position “PS D&G, I STRONGLY disagree with your politics…”. Miley was referring to the responsibility of the brand dressing US first lady Melania Trump. The Italian designer replied on his Instagram page “We are Italian and we don’t care about politics, and mostly neither about the American one! We make dresses and if you think about doing politics with a post, it’s simply ignorant. We don’t need your posts or comments. So next time, please, ignore us!!”

Since the Italian luxury brand started to dress the US first lady, they faced several boycott comments on social media. Stefano Gabbana then launched the #boycottdolcegabbana hashtag in Instagram and inspired by this, designed a capsule T-shirt. The Tees with the message I love #boycottdolcegabbana that you might have seen around. Is it a response to those who mix politics with fashion, a clever marketing strategy, or just an “I-had-enough- of-this” kind of response?

The debate could be very interesting. Is fashion nowadays a way to project ideologies and use the influential empires of luxury to ruin or raise political points of view? What do you think?

Also, the show was full of Instagrammers, YouTubers, Viners, influencers … not so many models. If you check the comments on the video at the end of the article you will find people loving it and people hating it. Do you embrace this movement? In a way, we get to see more “real” people, with different body shapes and heights. On the other hand, models are models for a reason and they know how to best show and sell the clothes. Is D&G looking for all the visibility they can get through their influence or wanting to include everyone on their show?